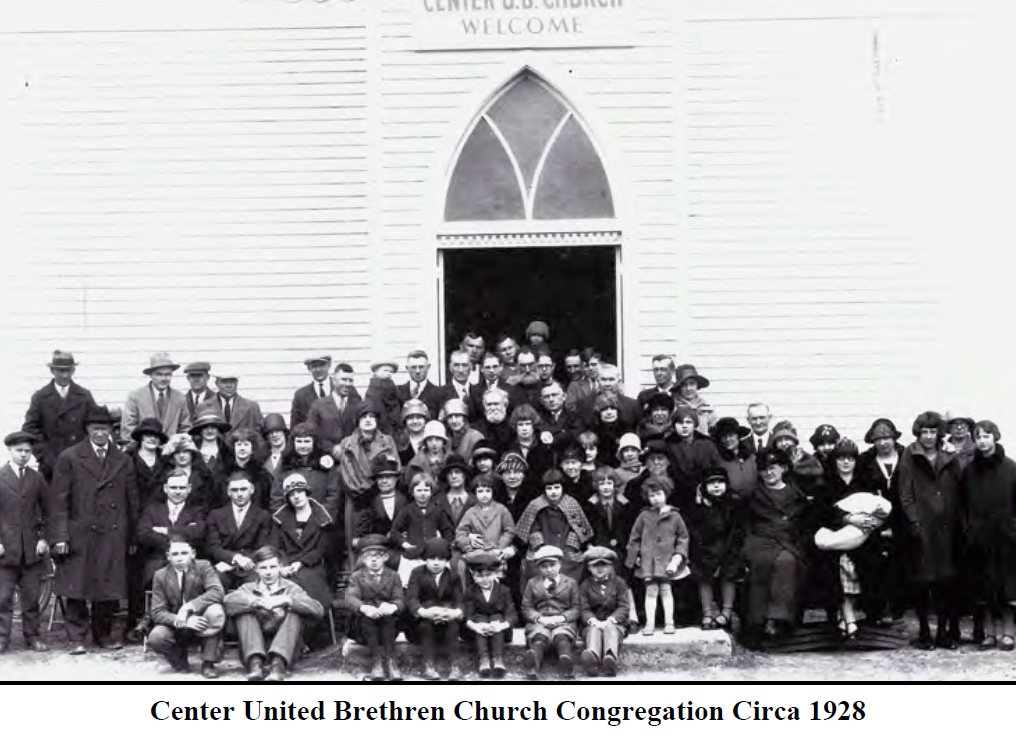 The Center Church has served the small community of Center, located six miles west of Portland on Highway 26, in Greene Township, for one-hundred and twenty-five years. The little church was one of the very few remaining country churches still in operation. Its story is a classic tale of a pioneer place of worship. Please take a trip down memory lane as we recall the history of this little country church.

Center Church was organized by Rev. D. A. Boyd in the spring of 1891 at the school house which stood where the church now stands. Roger Bowen, a current member of the church, says that the original church and school stood across the road to the south of Highway 26. He says it was later moved across the road to the lot on which it now stands. The exact original location will have to be researched. There were twenty-two charter members in the class organized as a part of the Redkey Circuit of the Auglaize Conference. It seems that two groups of people with different denomination-al backgrounds had settled in the community, the United Brethren and the Christian. They worshiped together for a time, but each group wanted to form a church of its own denomination. At the same time they seemed to realize that there were enough people for only one church. The United Brethren won the race and had a class organized first with a regular minister in 1891. The Christians never did build a church. How far they may have gone with organization or how many of them continued to worship with the United Brethren or later joined the church is open to question.

In 1896 the lot on which the schoolhouse stood was purchased and a church erected at the cost of $1,500 under the leadership of Rev. Thomas Coats by the following board of trustees: Samuel Valentine, Noah N. Walter, William Shultz, William McKinley, and Smith Spahr. The men of the community did most of the work. They hauled rock from Montpelier, with horse and wagon, for the foundation.

In 1900 when the church, along with others in that section of the country, was transferred from the Auglaize Conference to the White River Conference. Mrs. Allie Sipe was the pastor. She was a pioneer type of woman. Called to preach, she said “from behind the plow” she had little education, but was a forceful preacher, quite “spiritual” and emotional. Mrs. Cranor smiled when she said one night when Mrs. Sipe got to preaching and shouting, she grabbed up a song book and threw it, apparently at random, and it hit old Mr. Spahr.

Rev. C. J. Roberts, who followed Mrs. Sipe in the work, was well liked and his wife was also a help socially. He was a good preacher, but was long winded. One day his own boy told him he saw two or three places where he could have quit his message.

Rev. C. N. Broughman followed with one year in the work. Then came J. R. Knipe and D. W. Zartman with one year each. Knipe was a younger man and called quite a lot around the community. Mrs. Zartman organized the first missionary society in 1908, but it gradually dwindled out to be reorganized by Mrs. Sharp in 1922.

Rev. L. A. Ludieston followed Zartman. He was a young man, not yet ordained. He had preached but one year and this was his second pastorate. He stayed two years, but did most of his work in Portland. Then there followed a succession of three men who stayed one year each. One of these, W. L. Waldo, was very well liked. He called a lot in the homes and had quite remarkable success. The membership jumped from sixty-three to one-hundred eight under his ministry.

Rev. Jessie H. Nall came from Redkey to Portland and Center in 1915 and stayed at Center six years, after which he took Portland full time. His first years at Center were years of great success. The last year the membership roll was examined and several names dropped. The next preacher was old, was not particularly well liked, did little work and stayed but one year. Then came Mrs. Lucy R. Sharp. As mentioned before, she reorganized the missionary society and organized the Ladies Aid. Mrs. Sharp had little education and had but five year’s experience, but she did a great work. Besides awakening their interest in missions and benevolence, she held children’s meetings one after-noon a week during the summer, held a revival that settled quarrels and brought restitution, and called around the community a lot in spite of the fact that she had to walk. Under her ministry the average attendance went up from sixty to ninety and the membership dropped from one-hundred seventy three to one-hundred thirty three. Forty names were removed without transfer—dead timber from previous pastors big gains. The church asked her to return the next year, but there was no place to live and she wanted t o help her girls go to college, so she refused the offer.

The preachers followed with one year each. One chewed tobacco and the other was old and did not take well with the younger group. At the end of that time the attendance was back down to forty-five. With the coming of Rev. J. C. Roberts, who stayed three years, things picked up again. His first two years were years of revivals and when he left the average Sunday School attendance was back up to fifty three. Under the two year’s ministry of P. W. Barker it climbed to sixty. Barker was young, a good mixer, preacher and visitor. His wife was a great help in many ways including preaching.

For four years again preachers came and went with one year each and the attendance dropped back down to forty and forty three. Rev. Helen Grantham Collins came in the middle of the year of 1933-34. Under her ministry the attendance fluctuated both up and down. She worked with the young people and young married people, and started a young married people’s class which has since proved of great worth to the church. The work of Rev. Berry for four years is difficult to judge. Reports vary and figures are uncertain. At the present time the average attendance runs about fifty. Rev. Lawrence Brown, a seminary student and author of this survey is the current pastor at the time of this writing. Under Brown’s leadership the church was moved back from near the road. [ The church history does not tell us when the church was moved across the road to stand on the north side.] A basement was added under the church when it was moved back and remodeled. In 1946, Center became the Evangelical United Brethren Church following a merger of the two denominations.

Ival Lane and John Russell were later ministers who saw growth in the church. In 1968 the church became the Center United Methodist Church.

The church has generally been on a circuit with one or two other churches, but changes in the circuit pattern have occurred frequently. In the later years they have chiefly been on with Bethel or Hopewell. For several years the church was on a circuit with Blaine and New Mt. Pleasant. The last circuit assignment was with Pennville, Indiana. The pastor at the closing of the church was Gary Phillips. He also pastured the Pennville United Methodist Church.

The average attendance at Center had dwindled to five or six attendees. They were Roger Bowen, Luetta Bowen, Jody Walker and sometimes her grandchildren, Nancy Cline and Pastor Phillips. All of those attending are residents of the Center community.

(The above is from the hard work of the Jay County Historical Society. We are very grateful for their hard work and research.) 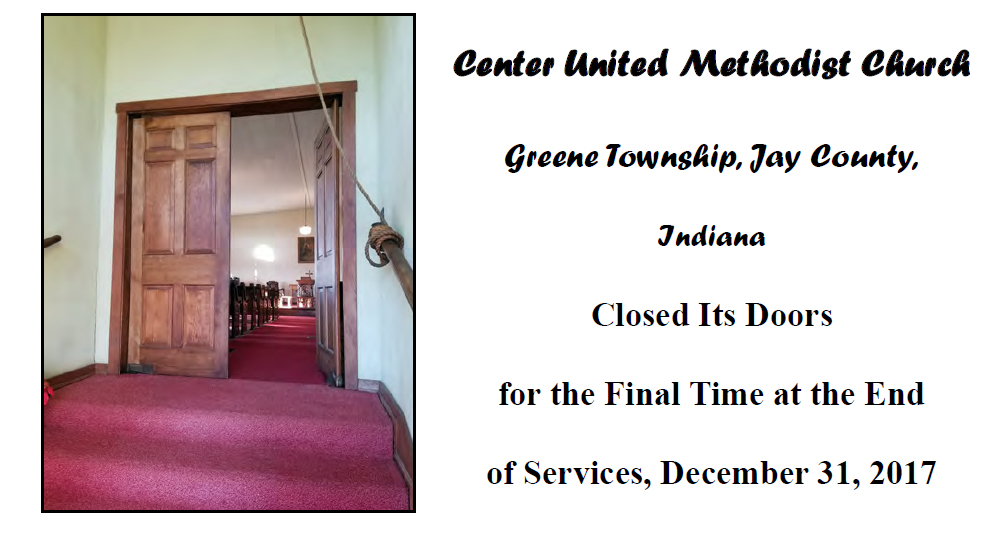 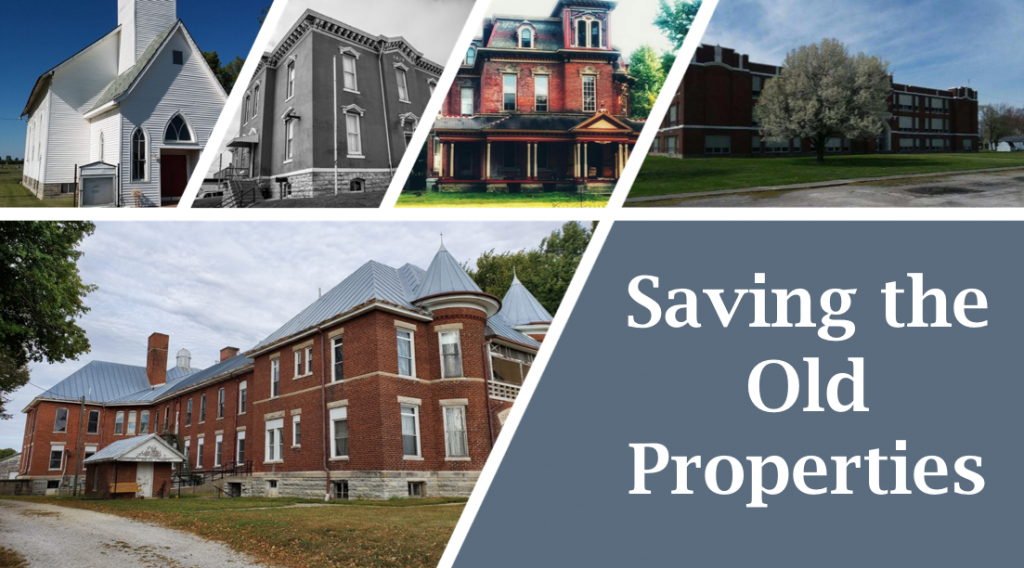 TO SCHEDULE AN INVESTIGATION